We always strive to deliver the best rank tracking experience in the world. To us, that means delivering fast and accurate results. We place a significant effort into building a software of the sort. On top of that we love to deliver tools that help you create and produce exceptional SEO results. Below are just some of the recent new features and changes made to AccuRanker.

AccuRanker supports a broad range of third party rank trackers. This means you can migrate to AccuRanker with no risk to your existing data.

We have worked hard to improve the speed and user experience when importing keywords from other sources.

By popular demand, we've added the ability to see our AI-based CTR value for the top 10 ranks on the SERP! You can find it in the keyword list by hovering a value in the Max CTR column.

We've tuned the keyword table to load even faster in the browser.

With this change we are targeting the rendering delay, i.e. what the browser does after having fetched data from the server. On a fast computer this was hardly noticeable before. But we want to be the fastest keyword rank tracker and that includes all hardware platforms. So we have tweaked the rendering to reduce the initial rendering load.

We're excited to announce a new feature that allows you to customize the currency of data like cost-per-click across AccuRanker. You can do this in two different places:

Please note that on group views, the account setting will always be used.

A new and improved dynamic competitor chart when viewing a single keyword! Click a keyword in the keyword list to try it out.

The chart is now available on the same page as the keyword rank history table and the chart loads more data by default.

Introducing the new Overview page for domains and groups!

The Overview has received a major overhaul and is packed with new features.

Learn more about the new overview in our blog post

Improvements to notes on charts

All charts outside the overview have received an update to the notes functionality making them much more user-friendly. You can now click a note to see a quick summary, and if there are many notes on top of each other, they will be grouped neatly.

When exporting, we now include the field extra ranks - which contains data if your domain is ranking multiple times for the same keyword.

When importing, we now also support extra ranks in two ways: either by reading from the extra ranks field or by detecting extra ranks from multiple rows.

Import performance has also been improved, with an especially noticeable impact when dealing with very large imports. In addition, we've improved the feedback messages when attempting to import a file with errors, so the errors are much easier to correct.

Using our API, it's now possible to read historical search volume up to 3 years back for each keyword!

This data is also accessible on our connector for Looker Studio (recently renamed from Google Data Studio) as the following new fields:

Even more speed and performance improvements

Adding additional improvements on top of our recent work on making AccuRanker faster than ever.

Our engineers have once again been hard at work on increasing the AccuRanker speed and performance. Major improvements have been made!

The Overview page now loads up to 3 times faster

You can now get the search intent for each of your keywords through our API.

Order by traffic value (SoV$) for the keyword list

All keywords - both tracked and untracked - are now labelled according to searcher's intent in AccuRanker. 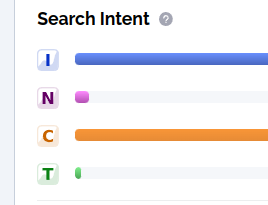 Add "Add tag" option to when you create a note

You can now optionally add tags whenever you create a note

API: "Above the fold" on domain

This solves several problems related to fetching updates in the background when you have AccuRanker open in multiple browser tabs.

We are proud to announce that our Google Data Studio connector has been approved by Google as a Partner Connector.

Average Rank in the Competitor and Tag Cloud pages

We've added Cost Per Click - or CPC for short - to reports. Both

Changes to the Keyword Discovery page: Based on valuable feedback from our users we have improved the user experience when importing keywords

Unfortunately we have had to remove support for adding new Yandex and Baidu keywords. We will continue to monitor existing keywords on those two search engines, but with reduced functionality.

We are happy to introduce Dynamic CTR. A industry leading approach to calculating Click Through Rate for keywords using our state-of-the-art machine learning algorithm.

We love our users and try hard to make the everyday experience of using our rank tracker as smooth as possible. Part of a great user experience is good keyboard shortcuts and documentation of those.

We've tuned our engines for increased speed when we generate reports

Share of Voice (SoV) is a key metrics when doing keyword research. So we've added SoV as a column in our Keyword Discovery tool.

Dynamic tagging is a powerful tool for segmentation of your keywords.

Introducing an unparalleled overview of your site and the competitors for each of your landing pages!

Years in the making, its finally here! A filterable multi-billion keyword database allows you to see which keywords AccuRanker has discovered for your domain.